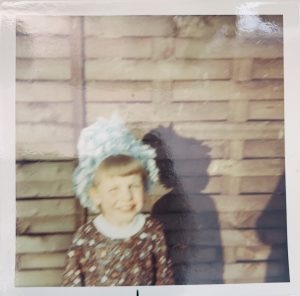 I’ve always been one to go against the grain.

Ever since I was young child and watched my Nan get Alzheimers at a young age, I was the person who questioned EVERYTHING.

This is me in my Easter Hat. I insisted on making it myself, despite my mum wanting to help. No, I didn’t win my school’s Easter Contest, that was won by my friend whose mother OBVIOUSLY made her hat, with bunnies and Easter eggs!!! (Yeah, I still feel it was unfair! LOL) My nan took the photo by the way.

And so back to my friend Steve…

When Steve stopped me in mid-sentence to tell me he wasn’t willing to go through “Biggest Launch Hell” again. I resisted the impulse to do what every other coach might have done.

I didn’t try to change his attitude.

I didn’t give him a motivational speech.

I didn’t put a happy face on it.

I knew damn well that he had a good reason to feel cheated by a system that forced him to do things that virtually guaranteed his heart-breaking losses.

I didn’t plead with Steve, I simply asked him if he would meet me the next day.

But I was also a little bit scared.

Steve had a damn good reason for feeling betrayed by the likes of me.

Even though I had been refining and improving my approach since the day I completed my own business transformation, I had no idea it could really get my new friend off the feast and famine rollercoaster

…and keep him off.

Steve, at this point had 2 coaching clients and was earning just $1600 per month. Barely enough to pay rent.

And then A Single Moment at a Coffee Shop Changed Everything…

By following what I told him to do, Steve had got his cashflow moving again, he was back to earning $42K per month (not quite his usual $50K but he was well on the way) AND he was taking more time off from his business.

But here’s the best part…

Not long after Steve had created an authentic fast cash injection into his business, and was ready to build out systems for the long term, he was at a coffee shop when a young woman walked right up to Steve and said something he will never forget.

Steve later find out this woman was a Bestselling Author and Speaker, but in this moment she was nothing more than a stranger who walked straight up to my client Steve and delivered the following statement just loud enough for others to overhear:

“You don’t know me”, she said to Steve, “but we’re connected on LinkedIn, and I just want to tell you something. I’ve seen you on social media for a long time and just …WOW… you’re really being authentic in your posts and I love everything you stand for now, you’ve really helped to inspire me to do bigger and better things in my business. Thank you!”

The words gushed out of her with such enthusiastic sincerity, that she suddenly caught herself and felt a little self-conscious.

“You are so inspiring, that’s all I wanted to say” she added “you must really love what you do.”

She gave an embarrassed wave and told Steve she would let him buy his coffee in peace.

Totally out of the blue.

I looked at Steve and he was beaming.

This woman had just given him the ultimate validation: an unsolicited compliment without any agenda whatsoever.

The look on Steve’s face in that moment is something I’ll never forget.

And you have to remember that this was long after Steve had achieved his results.

He was clearly never going to back-slide again. This was the “new normal” for him.

Now this might sound corny, but in that moment I felt such a rush of awe and pure happiness for my friend that it superseded any personal accomplishment I could ever remember.

I mean, here was a guy who had every reason in the world to give up, to accept his clients leaving as pure destiny, to retire on the bench, and play out his coaching days with whoever showed up. He could have become like the vast majority of coaches, slowly circling the drain in denial of creeping debt, depleted energy, and low fulfillment…

…and instead, he had decided to take another chance to make it happen for himself, putting his faith in me in the process…

…and so I basked in the secondary glow of Steve’s validation. I realized that helping him with HIS success felt just as fulfilling as creating my own - if not more so.

But I know what you’re thinking…

Well, Steve is doing just GREAT, thanks for asking 🙂

No rollercoaster, no crashing and burning, no pushy sales, no driving, killing, and crushing it… just continued business growth by leveraging some little-known truths about our value-driven business systems. (More on that shortly).

Now you might say - understandably - that I got lucky. That Steve was an exception to the rule.

And you could be excused for thinking this, because it’s been estimated that 95% of people who sign up for coaching/training who initially might get some short-term success, can’t sustain it in the long term.

I don’t know if that number is accurate. It’s been accepted as lore but it gets a little squishy when you look into the data.

That’s exactly what I’m going to be sharing with you over the next four pages.

And if you follow my advice - like they did - then you can absolutely have the exact business you want - the cashflow you want - and you can do it all without suffering or the discouraging rollercoaster that can crush your soul.

Never let anyone tell you that you can’t do it, that success is down to luck, or that you’re simply not good enough.

That’s BS and you need to REJECT it with every fiber of your being.

The radical and honest truth is that your success is a learnable skill, it’s NOT down to luck, it’s actually a system that delivers incredible value for your clients, allows you to express your purpose, and get paid well for doing it. Your clients get the solutions they need and you get to make a meaningful difference in people’s lives.

Unfortunately, there’s so much misleading information out there that you don’t know who to trust, how to be truly yourself, or how much growth is ENOUGH, so you are striving for a distorted view of success.

Sometimes we just have to face the facts.